In infants with joint hypermobility the connective tissue that holds the muscles together and connects the muscles to the bones via the tendons is very pliable. This affects the sensitivity of the stretch receptors and the muscle's readiness for action.

In most instances the low muscle tone is linked to joint hypermobility. However, if an infant is floppy and appears to be weak a full assessment by a pediatrician is important to rule out other causes.

What is joint hypermobility?

Infants with joint hypermobility have joints that are able to bend further than usual and a trunk and limbs that appear to be floppy and weak.

The increased range of  movement at the joints (sometimes called joint laxity or being double jointed) is due to differences in the connective tissue that forms the joint capsule and ligaments.

The joint capsule and ligaments hold together the bones that form the joint.  The joint capsule and ligaments are formed by a strong but pliable material called connective tissue. Connective tissue can be stretched a little way, just enough to allow the joint to move through the typical full range of movement.
In joint hypermobility the connective tissue has more give and can be stretched further than usual. This means that the joints are less firmly held together and can be moved further than usual.

The increased pliability in the connective tissue also affects the muscles which may appear to be floppy and are often weak. This in turn affects how the infant moves and develops and may mean that the infant is late achieving the major developmental milestones.

The slight tightness (stiffness) in the muscles of the hips and knees helps the newborn infant to lift the arms and legs up when kicking and reaching. 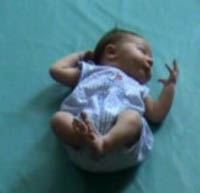 Newborn hypermobile (and pre-term) infants lie with their legs and arms more extended and flat on the cot mattress. The usual tightness of the hip and knee muscles is absent and the the hips and knees can be fully extended.

The laxity in the joints and muscles means that it requires more effort to lift up the arms to reach for toys and kick the legs. 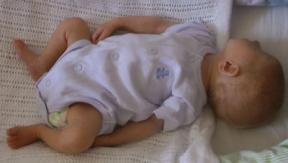 Within weeks active infants have  learned to keep their trunks steady when they kick, lift their legs up  and reach for toys. They also start  to push down on their feet and lift up their buttocks. All this action strengthens the muscles and gets them ready for sitting.

If the infant is hypermobile and also cautious she may not kick and reach vigorously and not develop the muscle strength needed to support the hypermobile joints and get them ready for rolling and sitting up.

The first 6 months are important for laying the groundwork for the postural control and strength needed for sitting.

Being active in lying allows infants  to develop a sense of how they can use their bodies to explore the world around  them and promotes visually exploring the world, using the hands to grasp and feel things and interacting with people. 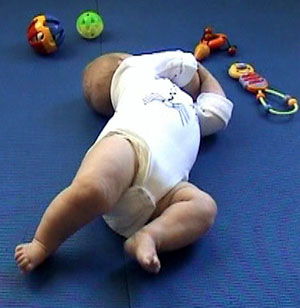 Hypermobile, low tone and very cautious infants often hate tummy time They protest vigorously and quickly learn to flip back onto their backs when placed flat on a firm surface.

At 10 months this little fellow has not yet learned to push up on his arms and after a while puts his head down and starts to complain. 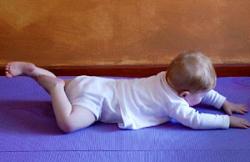 Spending time on the tummy is important for developing muscle strength and flexibility in the back and hip muscles in readiness for crawling and walking.

It is very important to find ways to encourage your infant to spend time lying on the tummy, propping up on the arms and eventually pushing up onto the hands and knees.

Read more: Tracking your infant's development in prone and ways to get your infant to enjoy being on the tummy and to start pushing up into the crawling position. 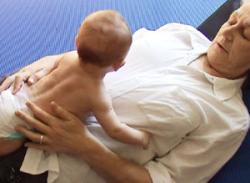 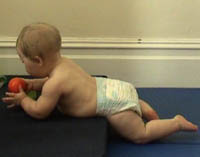 Learning to roll from the back onto the tummy takes lots of effort and requires many attempts to work out how to get it right.

Rolling  requires strong neck and tummy muscle and also involves using momentum. Infants who lack the strength to lift up the head often get stuck trying to roll by extending the head and legs. 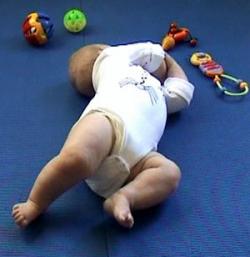 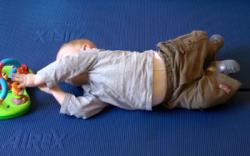 Sitting may be delayed

Hypermobile and low tone infants often learn to sit later than normal, sometime between 8-10 months.  Delayed sitting has a knock on effect: it means delays in the development of fine motor skills, social communication skills  as well as the onset of babbling and appearance of the infants first words.

Some infants sit with a very rounded back with the knees bent and the thighs close to the floor. 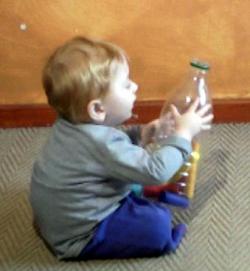 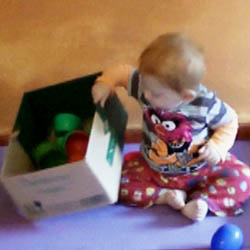 Other infants may sit with the knees straight and the legs far apart.  They can bend far forwards, often putting their heads flat on the floor. 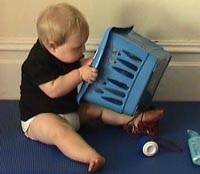 At a later stage, once the infant starts to move into sitting on her own she may sit between her legs in W-sitting. 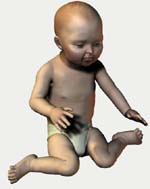 Because hypermobile infants lie and sit with their hips wide apart, they often develop tightness in the muscles that cross over the side of the hips. This makes it difficult for the infant to get the thighs more or less parallel when they lie on their tummies, try to get up into the crawling position and kneel upright. 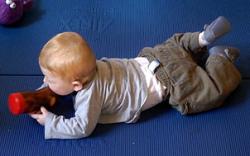 To check for hip tightness
Let your infant sit on a low step with the hips and knees flexed to more or less a right angle.  Now gently move the thighs together. Is this action easy or do the legs feel a little tight?  When the infant bends forwards you may also feel how the legs want to move sideways.

If the hips muscles are tight the infant will also tend the bend the lumbar spine as you move the thighs together. In this picture of Toesies you can see the tight band of the fascia lata on the outside of the thigh just above the tips of my fingers. 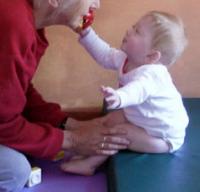 The  stiffness in the hip muscles affects the infants ability to get up into kneeling or onto all fours. The legs are held wide apart when they are on their tummies and this makes it difficult to get up onto the hands and knees. 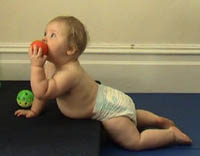 Hypermobile infants lock their elbows into hyperextension when they push up on their arms. As a result they do not develop the arm strength needed for getting up onto all fours and crawling. 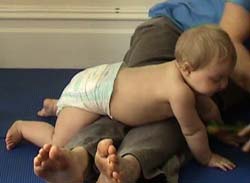 Infants may not get onto hands and knees and crawl

Hypermobile and low tone  infants sometimes do not crawl. Instead they may scoot on their bottoms to get around.

This little fellow manages to hop along on his bottom with great speed.

Read more: Why do some babies scoot on their bottoms 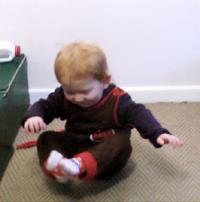 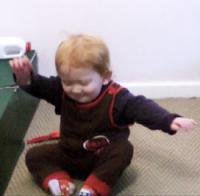 Standing, cruising and walking may be delayed

Hypermobile infants stand with their knees locked back in hyperextension. They may also  start standing with their feet wide apart and turned out. This makes it difficult to shift the weight onto one foot to take a step. 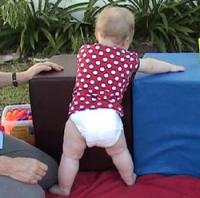 They often fall back with their knees straight  when they want to sit down again. 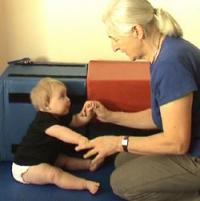 Hypermobile and low tone infants tend to walk a few months later than usual, sometimes as late as 18-20 months.

However, unless the infant  has another disorder as well,  hypermobile babies eventually walk independently. As a rule of thumb, if an infant is not walking by 20 months there is some cause for concern and physiotherapy intervention is possibly needed.
Once up on their feet, hypermobile babies may trip and fall easily even after several months of walking experience. This is often due to weakness in the leg muscles rather than a balance and coordination problem.   They may be very nervous about stepping up onto a small step, stepping over obstacles and walking on soft and uneven surfaces.
Read more:
Why some infants are late learning to walk.

Developmental Gym for Infants and Toddlers